The information in this Wiki Page applies to TRS19, Trainz Plus and TRS22. This page is intended to provide you with an overview of the properties and features of Routes and Sessions when creating layouts for Trainz. More detailed descriptions of these various features plus instructions on getting you started with creating Routes and Sessions can be found in the Trainz Wiki How To Guides - links are provided at the end of this document.

The virtual worlds that Trainz creates can be classified as:-

What is a Route?

A route (also known as a "Layout") consists of most of what you will see on the screen when using Surveyor and Driver. Things such as the landform or terrain, most (if not all) of the scenery items, the ground textures, the effect layers (TurfFX and Clutter), plus some "environmental" features.


A route consists of two parts:-

This covers all those visual elements that are "painted" in Surveyor with a brush tool and all the Environmental features. 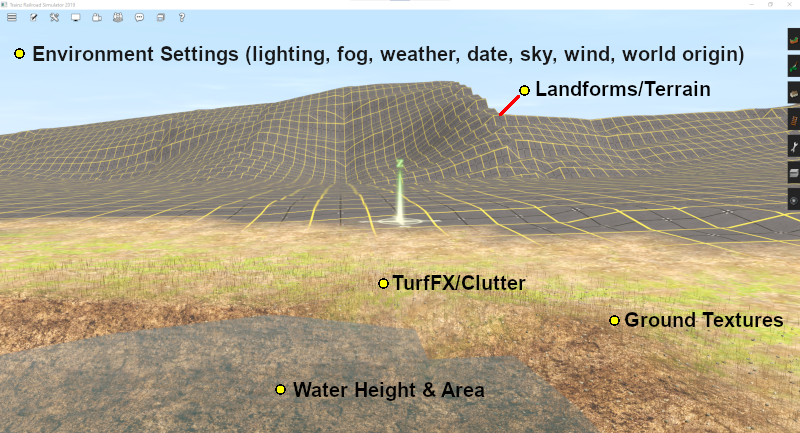 All scenery assets are held in layers. Route Layers give you a way of organising or grouping the assets displayed in your route. 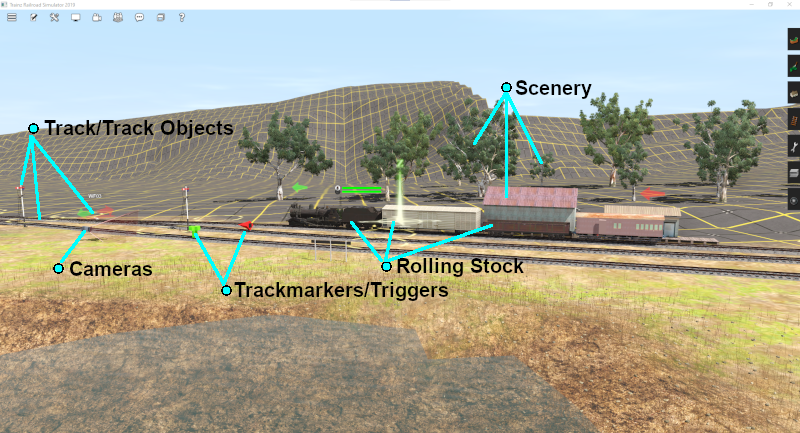 Route Layers have those scenery items that you want to always appear.

The Main Menu screen is shown below. The first option (shown highlighted in the image) opens Driver/Surveyor with all its options including loading and creating a route. 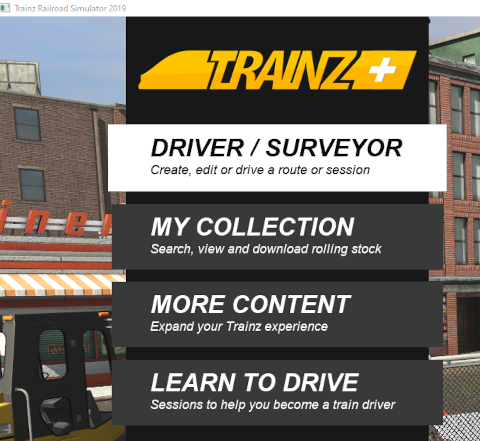 In Driver/Surveyor a strip of thumbnails for all the installed Routes will be shown at the base of the screen. The strip will scroll horizontally if there are too many to display. Just move the mouse pointer onto any thumbnail to reveal the scroll bar device.

The  MAIN MENU  button will take you back to the starting or main screen.
The  Sort By A-Z  will give you a drop down menu of sorting options for the thumbnail list.
The


The thumbnail images are colour coded.

On the Driver/Surveyor screen the route options are shown as a set of buttons at the bottom of the screen.

It is strongly advised that you enter some details before clicking the tick icon to create the new route. This will save you time and hassle later.

You must first find and select the route to load from those already installed. At the top of the Driver/Surveyor screen the route search options are shown as a set of buttons.

This will produce a display of thumbnails at the bottom of the screen.

Click on the thumbnail for the route you want to load, then click on the  EDIT ROUTE  button to load the route into Surveyor.

Trainz provides a shortcut that allows you to load an existing route directly into Surveyor for editing from Content Manager.

The message is saying that the assets in the list may have been changed since the last time you loaded them and exited Trainz normally. For example if you had been editing the route and/or session and had experienced a crash to the desktop or had used Windows Task Manager to terminate the program.


The options you will see are:-

You could also use the Content Manager program (select  Manage Content  from the Trainz Launcher) to Submit the open route or route and session assets. This has the risk of replacing the last good copy of that asset or assets with a possibly faulty copy.

When you create a new route (with or without a named session), or load an existing route without a session, and start adding scenery assets they will automatically be placed into a Route Layer. See


Any ground textures, water, effect layers (turfFX and clutter) you add, or terrain changes (including new baseboards) you make, will be added to the Route Data.

There are some important restrictions on the merging of two routes:-

What is a Session?

In general, while a route provides the physical structures (or "hardware"), a session provides the services (or "software"). While you can easily have a route without a session, it could be a very limited (or even a boring) experience.


A single route can have multiple sessions, or none, but a session must always belong to a route. To put it into Trainz terminology, a session has a route as a dependency.


A session consists of two parts:-

Session Data are often the "invisibles" that control the operation of a session. Session rules, driver orders and loco assignments, commodities (loaded, unloaded and carried) and most of the Environmental Settings are examples of Session Data. 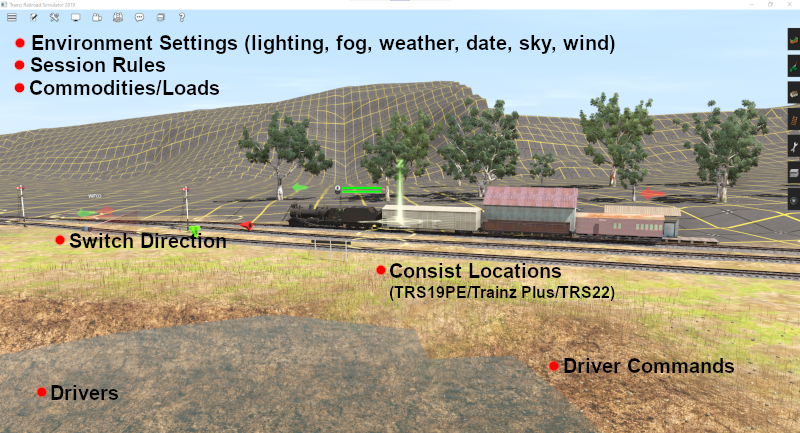 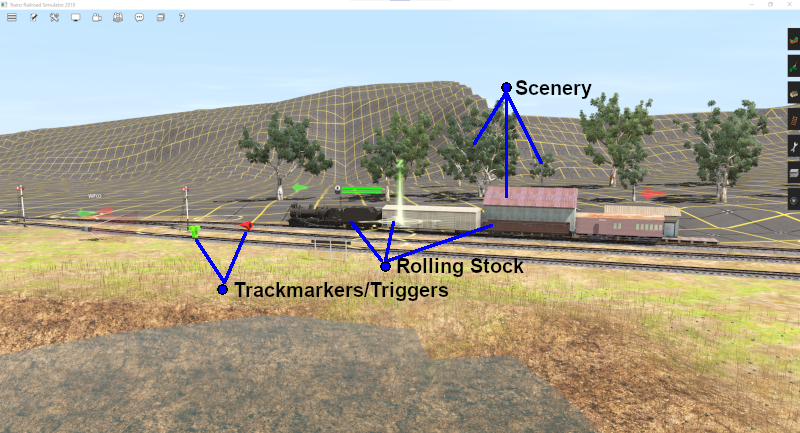 Session Layers give you a way of organising or grouping the assets displayed in your session.

A new session can be created in two ways:-

Both methods will load the route into Surveyor and create a new session with all its values/parameters set at default levels.

There are two different ways to load existing sessions into Surveyor.

This will produce a list of session thumbnails at the bottom of the screen. As with the route thumbnails, the list can be scrolled horizontally.

Click on the thumbnail for the session you want to load and then click on the  EDIT SESSION  button. This will load BOTH the route and the session into Surveyor.

Trainz provides a shortcut that allows you to load an existing session directly into Surveyor for editing from Content Manager.

To start Driver simply select a session as described above in Loading an Existing Session and click the  DRIVE SESSION  button.

This will load both the session and the route into Driver.


You can save your "game play" in Driver at anytime. See

Trainz provides a shortcut that allows you to load an existing session directly into Driver from Content Manager.

When you create a new session, or load an existing session, and start adding scenery assets in Surveyor they will automatically be placed into a Session Layer. See the Trainz Wiki Page


Any changes made to the Session Rules (including drivers and their commands), the Environment Tools, Industry or Rolling Stock settings, will be added to the Session Data.


There are also other changes that will be added to the Session Data.

Saving a Route and a Session

Routes and Sessions are saved from the System Menu on the Surveyor screen.

Saving a New Route and Session

If you have created a new route and select Save or Save As..., then you will be presented with the following Save Route Dialogue Windows.

Saving an Existing Route and Session

Saving a Route and Session Using the UDS

Most of the problems users seem to be experiencing with the UDS, judging from the posts in the Trainz Forums, is when saving their edited session before switching back into Driver mode.

When you are in Driver Mode at least one of the consists will probably be moving. Some of the Session Rules may have already been completed while others may still be running or waiting for events (e.g. triggers to be activated). If, after switching to Surveyor Mode, you then choose to save using the Overwrite existing session option then you will be replacing your original starting session with a new one with the consists saved in their new positions and the Session Rules saved in their new states. So when you later load and restart the session things will not be the same as they were in the original or starting session.


Unless you have a particular reason for overwriting the original Session  then the recommended save options are:-

If you have have NOT edited anything while in Surveyor and select  Save  then you will be shown the Save Driver Session dialogue window to save the session in its current state as a Driver Game (also called a Game or Driver Game). This is exactly the same as pressing  Ctrl   S  while in Driver. 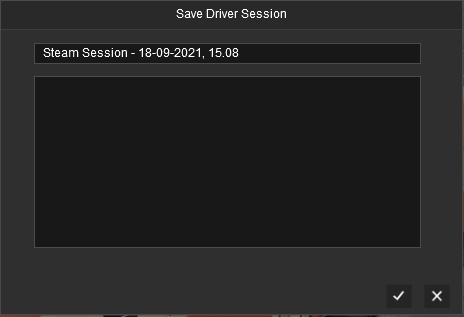 The Driver Game will appear in the Select Session menu for the route. Loading it will resume Driver at the point where it was saved.

If you exit Surveyor after editing without saving then you will be prompted to Save.

Cloning a Route or a Session allows you to work on a duplicate copy of the original. All changes that you make will be saved in the cloned copy leaving the original copy unchanged.

Routes and Sessions that have been loaded into Surveyor can be cloned using the  Save As...  command from the Surveyor  System Menu

Enter a new name or edit the original name (as shown above) for your cloned route or session.

1. Select the Route or Session to Clone

A Task Window will open to display the result. 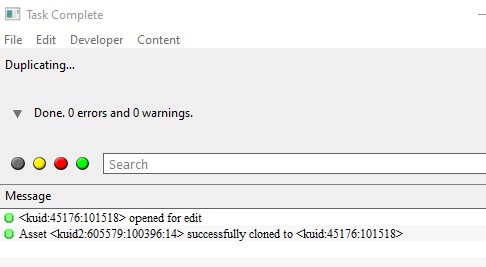 In the image above the original Route has been cloned and given a new <kuid> value.

The newly cloned Route will be shown in Content Manager as a New Asset that is Open for Editing.

2. Rename the Clone (an Optional Step)
You can give the cloned Route or Session a new name and a new description. Note that these changes will not appear until after the New Asset has been submitted.

3. Submit the Clone (a Necessary Step)

Saved driver games will be shown with their sessions for a selected route. The section

will display ALL the saved sessions and driver games which may be a very long list.
Method

will display ALL the saved sessions and driver games for a selected route, which should be a much shorter list.


Using Method 2: select the route first and then click the  VIEW SESSIONS  button. This will display a list of thumbnails for all the sessions and driver games in that route.

Where there is only one session in a route, the session will be the first thumbnail shown in the list followed by the driver games. Note that the session is selected by default.


Select (hightlight) the Driver Game you want to load and click the  DRIVE SESSION  button.

This will load the Driver Game, the session and the route into Driver.

If you need a more selective way of deleting routes, sessions and driver games, then use Content Manager from the Trainz Launch Screen. Select the Filter Routes & Sessions. 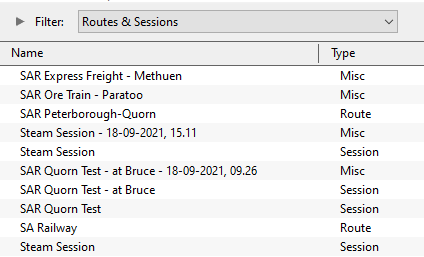 The Type column will identify each entry as a route, session or Misc. Misc in this case means a saved Driver Game.

This page was created by Trainz user pware in September 2021 and was last updated as shown below.