How to Use the UDS Interface

The information in this Wiki Page applies to TRS19 Platinum Edition, Trainz Plus and TRS22. Older versions of Trainz, including T:ANE and TRS19 (standard), do not have the UDS feature described in this document. A more detailed description of the UDS can be found on the Trainz Wiki Page

What is the UDS Interface?

UDS stands for Unified Driver Surveyor and is an "interface" or option built into TRS19 Platinum Edition, Trainz Plus and TRS22 that allows you to jump seamlessly from Driver into Surveyor and then back into Driver again to resume a session at the point where you left it. There is no need to restart a Driver session from the very beginning.

Most of the problems users seem to be experiencing with the UDS, judging from the posts in the Trainz Forums, is when saving their edited Driver session after switching to Surveyor mode.

When you are in Driver Mode at least one of the consists will probably be moving. Some of the Session rules may have already been completed while others may still be running or waiting for events (e.g. triggers to be activated).

If, after switching to Surveyor Mode, you then choose to save using the Overwrite existing session option then you will be replacing your original starting Session with a new one with the consists saved in their new positions and the Session rules saved in their new states. So when you later load and restart the Session things will not be the same as they were in the original or starting Session.

Unless you have a particular reason for overwriting the original Session then the recommended save options are:-

As mentioned above, when Driver Mode is running some of the Session rules may be completed while others may still be running or waiting for certain events (e.g. triggers to be activated). When you switch to Surveyor Mode these rules may be in a different state compared to what they were at the start of the Session. When you restart Driver Mode these rules may not be in a useful condition.


The Session Editor built into all Trainz versions allows you to add, delete and modify the rules that will operate during a Session. 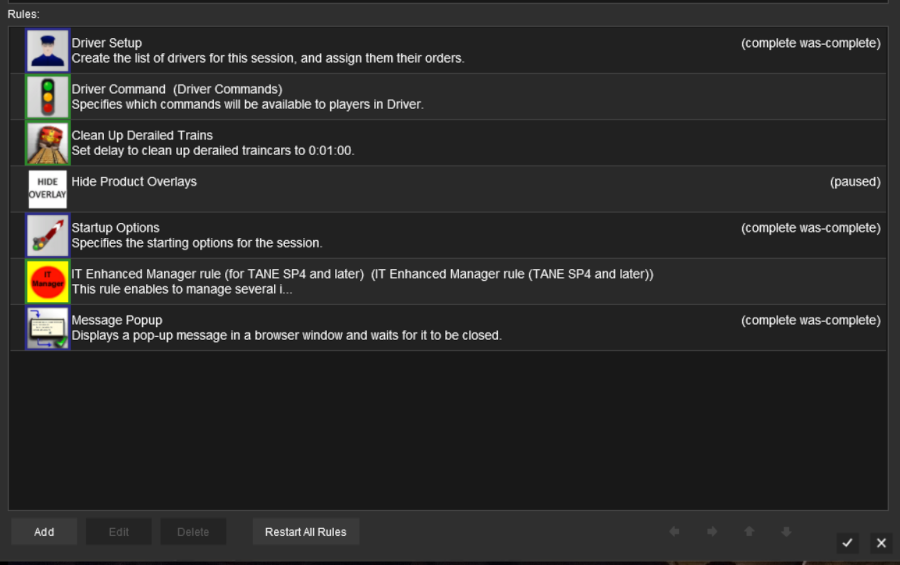 Many scenery assets actually have their properties stored in the Session, even when the assets themselves are in a Route layer. Editing the properties of these assets is considered to be a change to the Session. These include:-

If you make the switch from Driver Mode to Surveyor Mode after an IT/EIT path has been activated (but not yet cleared or cancelled) then you will be unable to edit that path. In addition, you will not be able to add new paths to an IT/EIT that has an open active path.


Pierre (pguy), the creator of the EIT asset and associated rules, has a detailed description of this and some possible solutions in a Trainz Forum post at:- EITs and the UDS


You can add additional trains and replace existing ones when in Surveyor mode but it is advised that:-

This issue is now under investigation by N3V


A train that is driven into a portal and later returned to the layout will be returned in the same layer as the portal and not in the trains originally assigned layer. Trains that are produced by a portal will be assigned to the same layer as the portal. This has  possibly always been the case with portals  but was probably unnoticed until the arrival of the UDS. It seems to have no other noticeable effect on trains.


This could become an issue if you make the switch from Driver to Surveyor after a train has been returned to the layout from a portal. For example, if a train is originally in a Session Layer (as recommended for TRS19 Platinum Edition, Trainz Plus and TRS22) then it is part of a Session. If it is returned from a portal that is in a Route Layer then it will now be in the same Route Layer as the portal and it will be part of the Route, not part of the Session.


If you save the Route after switching to Surveyor then the train will be saved in the Route and not in the Session. If this is an issue then the remedy is to open the property dialogue window of any wagon in the train after it has left the portal and change its assigned layer to the correct one. This will set all vehicles in that train to the same correct layer.


Note: It is not recommended that you solve this by moving portals to a Session Layer if you have multiple Sessions because the portals will then only appear in the Session that contains the portals.

This page was created by Trainz user pware in June 2021 and was last updated as shown below.