TRS19 introduces a new Driver UI (User Interface). Many of the functions will be familiar to Trainz users, although there are several new systems introduced.

At the bottom right corner of the Driver UI are a set of buttons that will appear in your Driver sessions.

The Buttons Panel provides a selection of buttons for driving your train. Different buttons will be available to use depending on the train you are driving; these buttons are available in all UI modes.

The Driver UI Mode buttons allow you to select if you are driving with Simple Controls or Realistic Controls, and to access the AI Command Bar.

The Driver UI Underlay Toggle will turn a shaded underlay for the new Driver UI on or off. This may help provide some extra contrast to the UI in some situations.
Note: This has been moved to Display Menu > Interface Underlay

The new Track Profile feature provides a brand new way to view the track ahead of you, showing you the grades ahead along with a variety of track features.

You can also zoom in and out to show more, or less, of the track depending on the speed you're travelling at or the density of trackside objects ahead of you.

TIP: For more accurate control, left-click and drag your mouse cursor up a few cm away from the dial.

There are two different versions of the Realistic Controls HUD, one for Steam locomotives and the other for Diesel and Electric locomotives.

The Steam Locomotive mode of the Realistic Controls HUD provides you with all of the important controls for steam locomotives, as well as a range of readouts for the locomotive's current state.

The Diesel Locomotive mode of the Realistic Controls HUD provides you with all of the important controls for diesel and electric locomotives, and includes a range of readouts for the locomotive's current state. 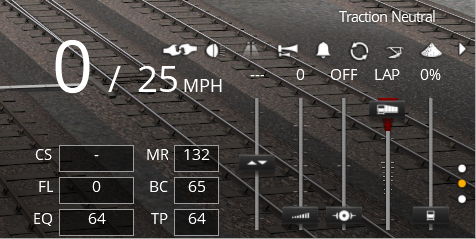 See the Diesel and Electric Controls page for further information.

The Driver Menu Bar provides access to a range of options relating to the operation, and conditions, of the session.

Some important menus are also outlined below.

The Driver System Menu provides access to several options, such as the settings and save game options 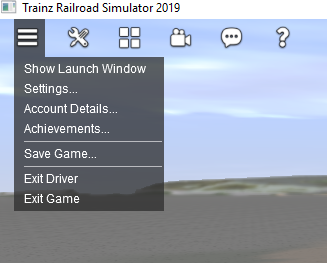 The Driver Tools Menu provides access to a selection of tools for Driver Mode, including Pause, Find Object, and more. 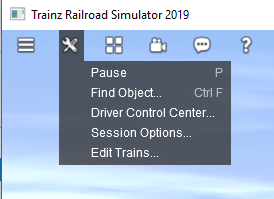 The Driver Window Menu provides access to the various interface elements that open up in a new window. 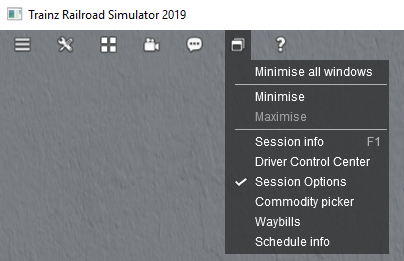