Trainz Plus is the latest version of Trainz and is available through Trainz Plus and Gold Class memberships (and now also through the Steam Store). Trainz Plus build is updated regularly with new features and content. Many of these features (or probably most of them) will end up being included in future versions of Trainz. 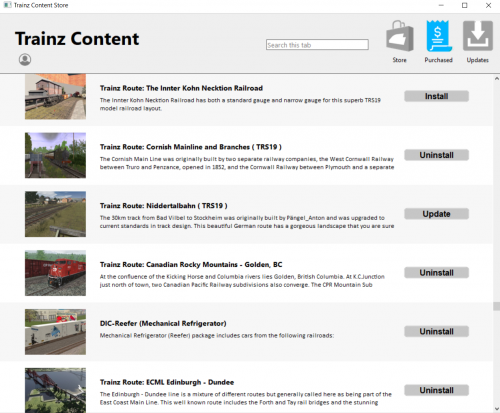 With several months of feedback and support from our Trainz Plus testers, this update sees the "Phase 1" release of [| Surveyor 2.0]. To get detailed help with the new Surveyor tools, please check out our | S20 online guide.

Several of the upcoming TRS22 routes were also made available to Trainz Plus members during this period.

This Trainz Plus update coincided with the official release of TRS22. Along with a number of bug fixes, it delivered a huge range of MPS updates with a focus on stability and usability. The final of the 5 new TRS22 routes, "Schwaninger Land", was also released to all Trainz Plus members.

This update focusses on providing support for user-created Content Packages to be used in Multiplayer Surveyor, meaning that users can now access all their favourite content.

This update has a number of HUGE new features.

Yes folks, the time has finally arrived when you can manipulate terrain without being limited to a 10m or 5m grid.

The new HD Terrain option will be part of our next massive Trainz Plus update which will go into external testing Dec 2022 and be released early 2023 to all Trainz Plus members.

Living Railroad is a totally new, automated approach to running your railroad.

Load up any route, and the Living Railroad Dispatch systems will dynamically query all available Industries, Passenger Stations, Train Vehicles and Drivers to create a list of potential Tasks.

Tasks are then prioritized based upon which Industries require goods, which Locomotives and Rolling Stock are suitable and then AI Commands are automatically created and issued to each available Driver.

The player can manage the Tasks and Drivers or choose to drive any train at any time.

TLR is also fully supported in multiplayer and MPS sessions.

The new Operations UI is a major unification and upgrade from the “Properties” and “View Details” dialogs. It includes:

This is an entirely new purpose-built logging system providing detailed information about every aspect of your railroad operations. It includes:

Patching Trainz Retail to Trainz Plus

From the release of TRS22, we have split Trainz Plus and Trainz "Retail" builds into their own separate branches. This means that while Trainz Plus owners have access to TANE, TRS19, and TRS22, to access the Trainz Plus features, you must install the latest Trainz plus build (found by logging in to your MyTrainz account).

Go back to: TRS22 Help Page