HowTo/Update an existing asset on the DownloadStation

Assets need not be final once they are uploaded to the Download Station and can be easily updated. This guide details how to create a new version of an asset within Content Manager. 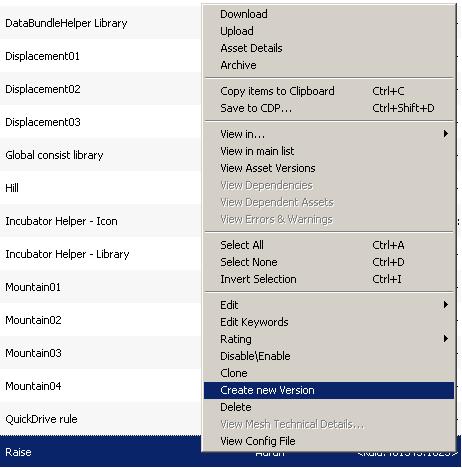 To update an asset you have uploaded to the Download Station, first select it in the main list view in Content Manager. Once selected, simply right click on the asset and choose "Create New Version".

This will create an exact copy of the asset and then update it to obsolete the old version. This is done in one of two ways:

An asset's KUID is used to uniquely identify an asset in the Trainz world. The KUID2 format introduced a version number to this identifier, allowing content creators to create a new version of an asset that would replace all older versions. When a new asset version is created Content Manager increments the version number by one.

The maximum KUID version number is 127, beyond this you must use the obsolete table.

The obsolete table takes the following format in the Config.txt file file:

Each asset listed in the obsolete table will be replaced by the new asset in game. A single asset can obsolete as many assets as you like but should be of the same kind, basic functionality and appearance.

It is not allowable for multiple assets to obsolete a single source. In other words two assets cannot both obsolete <KUID:123456:1000>, this would create undefined behavior in game depending on what content is locally installed.

Care must also be taken to ensure circular obsolescence is not created. An asset must not obsolete itself, either directly or indirectly. For example, consider the following Config.txt files:

Creating two assets like this that obsolete each other can lead to unpredictable behavior. It must be avoided.

Other than obsoleting the original, the new asset will be an exact replica. You can make any changes you like and upload the new version to the Download Station as normal. New asset versions should not change the behavior or style of the content in any way, they are used to make improvements and fix errors only.

For more information on uploading assets to the Download Station, see the how to guide here.

Return to How To Index