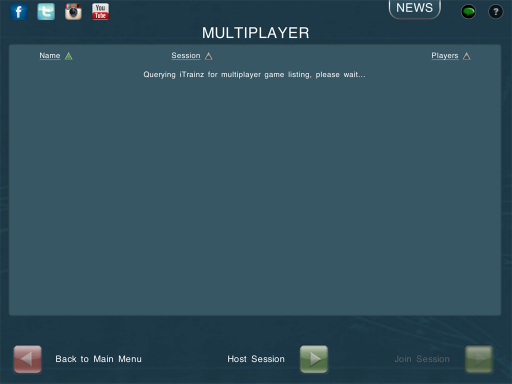 Joining an existing multiplayer game is as simple as selecting the game in the "Multiplayer" menu list, and tapping the "Join Session" button at the bottom right of the screen. If the game in question is full or is a private game which requires a password, you will be notified accordingly.

All multiplayer games have a "host" who controls all aspects of the game, and who has certain practical responsibilities toward the other players in their game. While hosting a new game is as simple as tapping a few buttons, there's not much point in hosting unless you also have some friends who have agreed to join your game or are willing to wait until a random stranger joins in. If you're looking to play in a multiplayer game, it's usually best to check the list of existing games first, and only host your own game if nobody else is playing something suitable.

You may use the in-game iTrainz Chat facility to ask other players if they want to participate in your game, however don't be annoying about it- the other chat participants may be busy doing other things, or they may simply not be interested in playing at the current time. It is not considered polite to repeatedly ask people to join your game, and if you make a frequent nuisance of yourself, you may be blocked from accessing the in-game chat. Please also note that the global chat facility is not the same as the Multiplayer Chat, which is only visible to people who are already participating in your multiplayer game.

Please be aware that talking to strangers in the in-game chat or in a multiplayer game is just like talking to strangers in real life. They're likely to share some common interests with you (they're playing Trainz after all!) but it's also possible that some users will act inappropriately at times. Don't allow other users to pressure you into doing anything that you don't enjoy, don't be afraid to use the "ignore" and "ban" functions when appropriate, and if someone is deliberately causing you grief, please take a screenshot and report the problem to the N3V Games helpdesk. Don't allow yourself to be baited into an online argument; if someone is being unsavoury then simply ignore them.

The Code Of Conduct used for the Trainz forums also applies to the in-game chat. If you are reported for causing problems, and are found to have violated the code of conduct, you may be blocked from the in-game chat or from multiplayer. This may occur even if another user baited you into the misbehaviour.