The Trainz-build tag number indicates the minimum Trainz Code Version required to use the asset. Trainz will not attempt to load an asset which has a trainz-build tag that is newer than it's own version number, but unfortunately ContentManager will continue to report there are updates, even when they are entirely inappropriate.

This tag is also an indication of the age of the asset, and the general technical configuration and standards to which it is built. The values will range up from the oldest Trainz 1.0 release (2001) with three Service Packs making the version commonly referred to as Trainz V-1.3, or Trainz 1.3. Assets with old Trainz-build numbers are not built to take advantage of new Trainz features that did not exist in the version of Trainz that the asset was built for, and the oldest used approaches which have been entirely abandoned. Newer Trainz releases do their best to translate these older technologies into the newer releases standards (data organization and graphical tech) but some small percentage of assets cannot be converted. 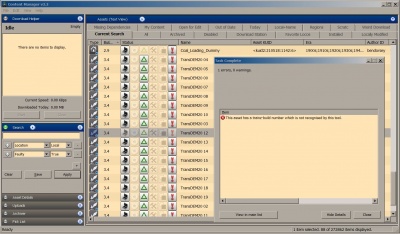 TS10 SP2's Content Manager (V-3.2) happily imported TS12 version (V-3.4) texture cdp's for TransDEM.exe in November 2013. Other legacy versions of Trainz will also import 'Version unidentified' trainz content.
* For the new Trainz users:' the moral of this story is to examine trainz-build tags (versions) ASAP after importing new content into CM and provide human intelligence as to whether to delete, keep the asset, or set it aside; seek advice before trying to use, or risk breaking Trainz for while.
* Some content can be retrograded to work in earlier Trainz releases. More recently published Routes and Sessions cannot.

A correctly-constructed asset built for an older version will usually function in a newer version of Trainz. However, Trainz content validation is improved over time, and newer versions of Trainz detect errors that older versions did not pick up on. Some content may be detected as 'faulty' in a current Trainz version that was missed in the version it was originally created for.

It should be noted that content that is uploaded to the Download Station is validated by the most recent version of Trainz, using the validation compatibility for the trainz-build specified by the asset.

If Content Creator Plus is used to modify an asset, it will automatically update the trainz-build version in the config.txt file to the current Trainz version. If this version has changed significantly, other changes to the config.txt file will probably be required. Assets which are manually edited will need the appropriate version entered. If the line is omitted entirely, the lowest possible version is assumed. This is currently Trainz-build 1.3.

Trainz-build numbers up to and including 2.8 are considered obsolete as of September 2012 and can no longer be uploaded to the Download Station. See the Trainz Life-Cycle Policy for additional details.