The normal map uses three channels of texture data to allow per-pixel lighting control. An overview of the normal mapping technique can be found on Wikipedia here.

A normal map is stored in an image file, but it is not an image: rather than defining the red, green and blue colors of an image, the normal map RGB values determine the X, Y, and Z values for the texel's normal in tangent space.

The normal data is most commonly encoded in the RGB channels of a texture file. The specific material type in use should be consulted to determine the use of the alpha channel in the same texture- it may be unused or may be used for an unrelated purpose.

How a Normal Map works

Normal maps work by modifying the normal used when rendering a fragment. By default, the normal will stick straight up from the geometric surface. A normal map will rotate that normal on either the (tangent space) X or Y axes.

In the following example we look strictly at the red channel; which controls the X axis of the normal. The arrows represent the normals. In example A there would be no normal map applied so all the normals would point straight away from the surface. In example B a normal map would be applied, modifying the normals in the appropriate areas. 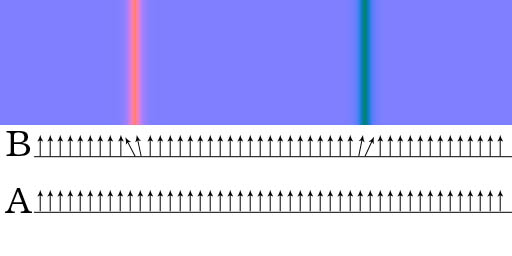 A typical normal map will look similar to the following image.

Note that this image is for illustration purposes only - jpg format is not appropriate for normal maps. 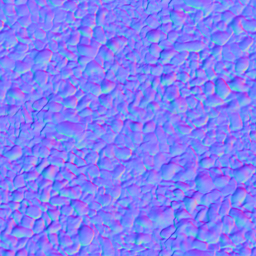 The appropriate way to display a normal map in 3D Studio Max is to use a “Normal Bump” map in the bump slot of the material. If you load a map directly into this slot it will display/render, but is viewing the map as a bump map and will not display correctly. 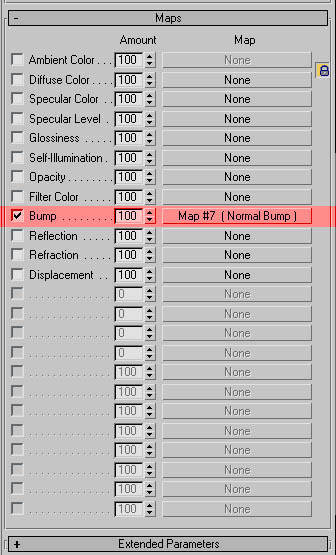 To display Trainz normal maps from within max we need to flip the Green channel to display the map correctly. This can be done within the material editor without having to actually modify the map.

In the properties for the Normal Bump under Channel Direction you need to check “Flip Green(Y)”. Lastly, load your normal map into the “Normal:” Slot. 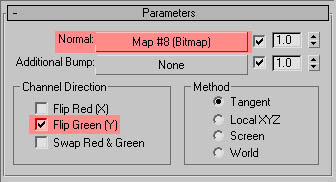 There’s one last step to displaying your normal maps within Max. There is a different way of previewing the normal map depending on which version of max you are using. 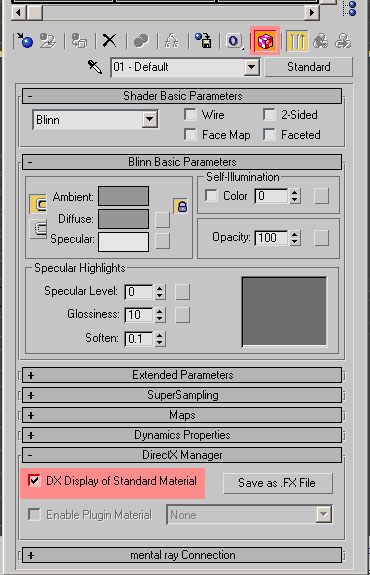 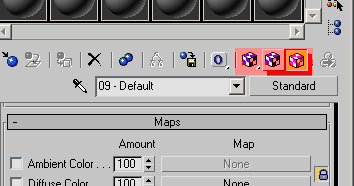 Getting Started with Normal Mapping

Refer to this page for notes on setting up an asset to illustrate these techniques.

Note that normal maps produced by Max typically have a reversed green (Y) channel. At the current time, this must be fixed after export by manually opening the resultant normal map in photoshop, selecting only the Green channel, and using the Invert (ctrl-I) tool. Failure to correct the green channel results in incorrect lighting effects within the game environment, destroying the effectiveness of the normal map.

Note: The ModifyMap token, with a setting of flipgreen, can be used in the texture file to flip the green (Y) channel for a normal map.

Creating a Normal Map for a Ground Texture

A normal map used for a 3D model is created in a 3D editing program such as Blender or 3D Studio Max using the 3D information in the mesh. This is known as Baking. Most ground textures do not use a 3D mesh, so if you want to use a normal map with ground texture that has no mesh you need to create it for yourself. This can be done using software that interprets the 3D information in a texture image using colors or brightness, or it can be done using a drawing program where you actually edit the images that make up the normal map.

NVidia provides a plugin for Photoshop the can create a normal map from an image: NVidia Texture Tools for Adobe Photoshop

Paint.Net has several plugins. There is one that creates the map from an image: Paint.Net Normal Map Renderer plugin

and another that allows you to edit the bump map, the specularity, the reflectivity and the reversal as separate images: Paint.Net The Normal Tools plugin

Other graphics editing programs may have similar features, either built-in or available as a plugin.