Retain My Asset Names, abbreviated as "RMAN", is a third party Trainz Asset Name management tool by Deneban Software. It is a shareware program for Windows Desktop and is hosted on a node of SourceForge, where resides its documentation exclusively. Version 1.00 was rolled out on May 21, 2020, announced on this forum blog entry. Currently it is applicable to TS12, TANE, and TRS19. 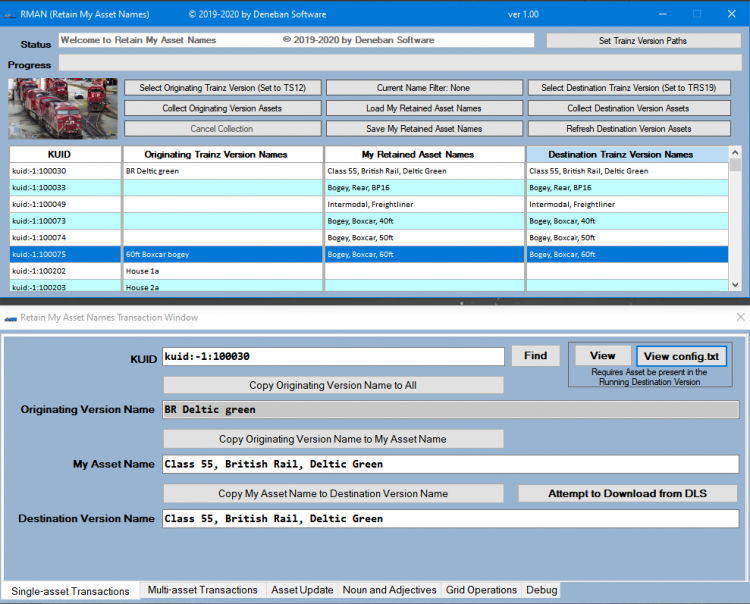 Links for Retain My Asset Names

Although RMAN was inspired by merely attempting to restore the user capability of assigning custom asset names within a users local asset collection (a capability furnished with TS12 but disconcertingly dropped with the advent of TANE), the final product is fairly robust in concept, aimed at providing a total name management solution; one that gains virtually absolute control of a users local asset names, never to be lost again to revisions or reversions. An example of the robustness of its concept is best seen in the breadth of data it will handle (and promises to handle): it can reach back to collect TS12 data while reaching forward across decades, managing TANE/TRS19 names, and claims it will project a users "permanent" customized names forward into future N3V Trainz releases that haven't entered their conceptual phase.

The balance of this page has summaries of RMAN's main features. Refer to the RMAN Wiki for complete documentation.

The Transaction Window is used once the user has imported the asset name data sets from the originating (optional) and destination Trainz versions. The Transaction Window has several tabs along its bottom border where asset names are edited, updated, deleted, and the data otherwise maintained. The window is opened by double clicking on the grid in the Main Window.

Here shown is the Single-asset Transactions Tab. From here the user can move the grid in the Main Window to any asset in the 3 data sets (originating, customized, and destination). RMAN operates on an asset KUID version basis. The KUID text box can be used to find an asset and set the grid to that position or can be set to any asset by double-clicking in any grid row in the Main Window.

To help the user in the naming process, the asset's preview and config.txt buttons provide full information on the asset.

Because a Trainz user is constantly adding assets to their local asset library, RMAN provides an "Asset Update" facility, shown here, to maintain the RMAN data sets current. This is located on the "Asset Update Tab" of the Transaction Window, but it can also be launched from the Main Window using the "Refresh..." button.

The user can choose from reviewing each new asset name individually, or having RMAN do a bulk update. Which method is determined by the "Options" checkbox. Here is shown a new version of an asset has been discovered by RMAN, but new KUIDs also appear in the same manner. The name appears in red and is editable. The "Copy Name from Previous" button can be used to carry forward the name used in the prior version, if a version update appears. Asset previewing and config.txt viewing buttons are also provided to help the user disposition the new asset's name. The user can either save the name and continue the process or save the name and quit the process. If the user quits, any non-dispositioned KUID versions will appear next time an Asset Update is invoked. The saved name is used both in the users custom names and the Trainz destination version asset library.

Similar to "Asset Update" there is an "Asset Deletion" review process, although its execution is not as pressing or important as Asset Update. This process seeks out KUID versions that appear in RMAN but not in the user's current Trainz installation. It is located in the "Multi-asset Transactions Tab" of the Transaction Window. This facility can remove kuid versions from the 3 data streams RMAN carries, so the name is no longer carried. Alternatively, as a deleted asset is discovered and presented to the user, he/she can elect to keep the KUID version record and annotate what appears in their "My Name" data set for future reference. Here for example, the users customized names data set will retain the annotation shown, one indicating the asset is obsolete and what the DLS (i.e. originating author) calls the asset. In this case however, the destination Trainz version record for this specific KUID version will be deleted to reflect its deletion in the user's current Trainz installation. The process continues until all the deleted assets are dispositioned or the user aborts the operation.

RMAN is designed for highly reliable in maintaining the users data. The data streams and settings are saved periodically with an Auto-Save feature and when RMAN is exited.

RMAN contains other useful features which are fully documented in the Wiki. These include: