CCG/Modelling: Creating an Interior for Trainz

Creating an Interior for Trainz

The creation of interiors is probably the most time-consuming mesh asset you can make for Trainz. This is no doubt the reason why there are very few custom interiors around. In fact it is quite common to spend 2 weeks of full 8 hour days on a single interior. Excluding research time, tweaking and testing. Auran uses 3dsmax and Photoshop for modelling and texture creation. One major advantage of 3dsmax over it's simpler counterpart gmax is the ability to render images. As you will read further on, rendering images has been a integral part of the real-time texture creation of Auran's released interiors.

As every interior is fundamentally different, each has had it's own issues and requirements. Ie. Steam loco's have fire, and animated levers, Electric loco's need pantograph levers (while Diesel and Steam don't), and Diesel loco's may have a Dynamic brake and other specific requirements.

We'd like to give an outline of how we went about creating the mesh, the textures and the implementation of these combined to give you a better understanding of the interior asset's structure.

Much of the information we have found has come straight from the internet. I suppose Auran has had the luxury of making `generic' interiors where possible by re-using the control mechanism in other interior shells.

The main focus for the generic cabs has been to make the window and side door layout correct. The general interior layout such as beams, electrical boxes, sound proofing hessian and grills has really been up to the artist to make look convincing. This is certainly the case if there isn't a lot of information available.

One thing to bear in mind though is that you don't have to create a perfect prototypical representation. As an artist you have a bit or 'artistic-licence' and flexibility to place and arrange things that simply add to the feel of the cab.

Take the animated fan in the DD40 cab for example.

We start the model under the premise that it will be used for in-game purposes. We model it fairly low poly. Sometimes we may add some specific detail i.e. pipes if necessary, that will be removed after the rendering phase.

The interior shell, the levers, accessories, windows and piping should all be modelled at this stage.

The interior polycount limits are a little more flexible in TRS due to the increased minimum spec machine requirements. However don't go silly!

As an indication, here are the polycounts for a selection of Auran's real-time interior components:

This is the first of three texture passes undertaken to crate real-time textures.

We map hi-res textures to every surface of the model using the mapping commands from the `Modify' panel of 3dsmax - `UVW map' and `Unwrap UVW'.

Below are examples of hi-res textures assigned to the first pass of the DD40 interior front. Generally match the ratio of physical model dimensions to the texture. This way we eliminate details being stretched when mapping.

It is fairly important to limit the highlight and shadow variations to the hires diffuse textures as this will be created by 3dsmax during the render phase. Adding dirt and subtle surface texture is usually necessary (keep detail and texture consistent over all hires textures).

In many cases we will also create and assign greyscale bump maps to add additional surface variation and relief.

You can alter the material properties by altering the `specular' and `glossiness' settings before the next texture pass of rendering.

Once the first texture pass is finished it is now time to strategically add lighting to the scene. 3D Studio Max ships with a variety of light types.

The ones we generally use are the following:

The next step is to the second texture pass. This involves rendering all details and surfaces (front, back, sides, floor, ceiling, door recesses etc.). 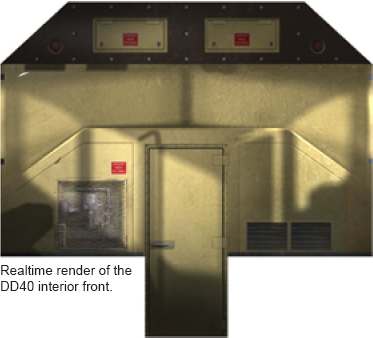 There is a very handy 3dsmax material plugin called "Cast Shadows Only" from Blur Studios This material makes the object invisible, but lets it cast shadows. Very handy when trying to control what does and doesn't render in a scene.

We create another cab shell with the window cut-outs to completely surround the textured cab shell. This casts the window shadows over the model.

Download the 'Cast Shadows Only' plugin for 3dsmax4 from this webpage: http://max3d.3dluvr.com/plugins.php This plugin requires a utility called 'blurlib' available on the same site. You may need to use the search box on the site to locate the files.

This Phase takes all the rendered out textures (from Phase 5) and manipulate them into a format that TRS can read. 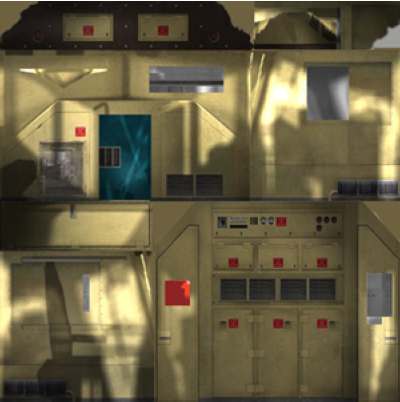 The front door however has been rotated 90 degrees and the floor render is in its place. This is in order to economically utilise the texture space.

Once the render manipulation is complete, you will probably have to re-assign much of the new textures back onto the model. In many cases this should just consist of re-doing the Unwrap UVW command.

After all your real-time textures have been mapped, it is now time to split up the model into logical divisions and add attachment points. Doing this in the logical order described below will save a lot of time and frustration.

Remember to save a non-split version for backup!

Any object in the scene that has to move (ie. levers and dials), or animate, will need to be `detached' from the main model. To do this, select the polygons or elements you want detached and through the 3dsmax modify panel, press the detach button and name the new object.

To make life a heck of a lot easier later on, it pays to move the pivot point of each new object to it's logical position. Ie. For needles and levers the pivot point should be the centre of rotation (with the rotation around the Z axis). Align lever shaft in the Positive Y direction.

To do this, access the 3dsmax Hierarchy panel, and press Affect Pivot Only. From here you can centre and align the pivot to the object and move it to the preferred location.

Note: GMax users It is of course possible to skip Phase 3 to 6 and create the real-time textures yourselves with a 2d editing program such as Photoshop or Paint Shop Pro before assigning them to the model.

Study the cab interiors that Auran has included in Trainz as correct lighting variations truly add to the 3D feel of the interior.

Studying how light falls on and reflects off different materials and adding this knowledge to your textures could be the difference between a nice cab and an awesome one.

3DSMax does remove a lot of the guesswork and has the ability to create flowing, seemingly natural lit scenes. It might take a little extra time but the results are worth it! Rendering options are not available in GMax.

These attachments are exported as part of the default mesh (or the main mesh). Objects for attachment must not be included in the export as they are each exported from their own 3DSMax files and attached to the default mesh separately (through config.txt reference).

Save a backup of the 3dsmax file!!

Select each object from the scene and save each one as its own 3dsmax file, (command panel, file - save selected). You may delete the object from the main mesh scene after you save it.

The next step is to open each 3DSMax file you have just created (of the movable objects), and move the object to 0,0,0 and make the rotational values 0,0,0 (press and right click these 3dsmax icons). This makes the object (and it's pivot) aligned correctly to the origin of the scene.

Now is the time to export the object to a Trainz mesh file (.im).

Note: When a lever is inserted into the default mesh it is attached at the lever's origin, regardless of the geometry the lever has. Setting the pivot point of the object earlier, and aligning the object to the origin in it's own scene, reduces the possibility of alignment errors.

The rotation is always through the attachment point's Z axis and the in-game notch display defaults from the positive location (clockwise) around the Z axis. Altering the angle settings in the config can adjust the notch position.

Refer to the config.txt example earlier

Exporting the objects is very simple. You will need the Trainz Exporter Plugin for 3DSMax, GMax (or Blender)

The latest versions of the exporters are available from here

or the GMax Asset Creation Studio,

Select the objects within the scene that you want exported, from the command panel, press File, Export Selected, select Trainz Format and remember to type in the file extension in the File name dialogue box.

When exporting the default mesh, you must include all attachment points. TRS may crash if the config.txt references an attachment that is not there.

There are a few key things to remember.

An interior uses the same properties as any TRS mesh-table, you need to add auto-create 1 or the mesh will not show in the scene. There may be occasions where you don't want a mesh visible by default. Take the switchlights for example. These have auto-create 0 in the config as their visibility is controlled by script when the switch is in the on position.

The visors, swivel chair and sliding windows are all setup as levers. In these three cases the notchheights are 0 so they don't display.
In the case of the visor and sliding windows, they each have a number of invisible notches. This is to give the user the option to have them 'slightly' open or 'partially' closed.
The sliding windows have a very large radius (30m), and very small angles.