Roaming camera allows you to move freely around the route. 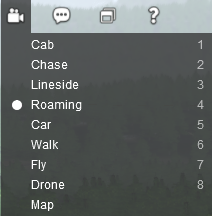