This page describes the TANE Developer Release build, which is available to members of the Trainz Pioneer Council and the Trainz Enthusiast Group. Information provided on this page is publicly visible and not covered by any NDA, however it should be noted that the features described here are NOT available to the public, and may never be available to the public in their current form. The features described here do not relate to any retail version of Trainz and should not be assumed to relate to any future retail version of Trainz. This page may include descriptions of in-development features which are not currently available in the Developer Release build.

Installation instructions are provided with each Developer Release build, however the following overview may be useful in understanding the layout of the build.

To install the Developer Release build on Windows 7 or Windows 8, simply unzip the archive and copy the contained TANE folder to your desired installation location. The default location of the retail build will be the Windows Program Files folder, however you may choose to place the build in any suitable location. Do not attempt to merge the TANE folder contents with an existing installation. If you wish to replace an existing installation, then delete that folder first before copying in the new build.

To install the Developer Release build on Mac OS X, simply unzip the archive and copy the contained Trainz.app to your desired installation location. The default location of the retail build will be the Mac OS X Application Folder, however you may choose to place the app in any suitable location.

The Developer Release build aims to follow Windows and Mac OS X "best practices" for on-disk layout, which may vary substantially from what existing Trainz users are familiar with. Specifically, for Windows users, any user-modifiable files are no longer stored alongside the exe files in the Windows Program Files folder. On both platforms, the user-modifiable files are stored in the standard per-user application data locations, specifically:

Note: If Windows cannot access your Docs folder, it will most likely choose the following path: C:\Users\<username here>\AppData\Local\N3V Games\TANE

Use of the OS-standard locations for this data have the following pros and cons:

It is expected that install-time and post-install options to move the user data files will be introduced in the future. A the current time, power users can add a text file named "override-data-path.txt" next to the TANE.exe or TANE.app file which contains the full (absolute) path to an alternative user data folder. If the folder does not exist or the path is otherwise invalid, the developer release build will use the default location. If the folder does exist but is not writable, the developer release build may fail to start.

It is also feasible that multiple data sources may be introduced in the future (such as a shared location for DLS/payware content and a separate per-user location for locally modified content. This is not expected for the TANE retail release.

At the current time, the Developer Preview build does not come with any installed content beyond the most basic files required to start TANE. The zip archive distribution will typically contain a content set which can be installed into TANE in the regular fashion using the "File > Import Content" menu.

The Developer Preview build supports importing of content folders using the "File > Import Content" menu or by dragging content folders from Windows Explorer/Finder onto any in-game "Trainz Content" window (opened by clicking 'Manage Content' from the Launcher window.) The imported content folder(s) may include raw content files or CDP files. Note that when using the "Import Content" menu, you need to import the folder that contains the items (i.e. not a .cdp file directly). Users should keep in mind that many content types are not supported or are incompletely supported - these should import correctly but may not function within the game environment. The Developer Preview build does not support asset validation at the current time; faulty content may simply fail to load correctly, or may crash the build.

In order to completely clean the build back to a fresh install state, the following steps should be taken:

It is also not possible to run multiple simultaneous instances of the same installation at the current time. The first-started process will lock the user data files, and subsequent startup attempts will "hang" waiting for access. If you accidentally start a duplicate copy of TANE.exe (Windows only), you may need to use Task Manager to terminate it.

Using an older version of TANE after having used a newer version of TANE may corrupt your installed data. This may require a database rebuild or complete clean to resolve. (Power users can avoid this problem by using different data paths for each build.)

The Windows "Launcher", "Content Manager", "Trainz Game" process division does not exist in the Developer Release build. This functionality is all provided by a single executable process. Separate windows still exist for each task, and multiple game and content windows can be opened simultaneously.

The Launch window is displayed when opening TANE, allowing you to navigate to the desired area of the game. The following commands are available from the Launch window:

The Trainz build number is displayed at the bottom right of the launch window.

The main menu offers a quick way to access various functionality in the Developer Release build.

The following menu commands are notable:

"TrainzUtil" does not exist in the Developer Release build. This will be re-introduced at a later date.

"TADDaemon" does not exist in the Developer Release build. This will be re-introduced at a later date.

In the event of a crash, a log is typically generated which may give the development team clues as to the cause of the crash. This log is provided in the following locations and should be emailed to N3V games at <crashreport@auran.com>:

When sending any such emails, please use the subject "TANE Developer Release" - ideally followed by the build number, if you know it.

The content management interface in the Developer Release build is accessed by clicking the "Manage Content" button from the launch window. Once opened, the window has the following elements: 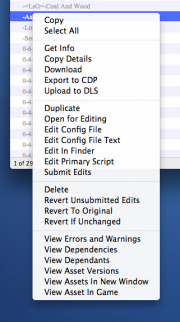 Various actions in the Developer Release build, especially the above content management commands, will open a Task Window. This window will show the current activity and a progress bar. Further details can be revealed by clicking on the disclosure triangle to view an activity log. If the task completes successfully and the log has not been opened, the window will close automatically. Otherwise, the window will stay open and you may close the window after optionally reviewing the log. Closing the task window while the task is in progress will cancel the remainder of the task. Cancellation will not always occur immediately (some actions cannot be interrupted) and any changes already completed will not be rolled back.

Rows in the log can be selected (use modifier keys to allow multiple selection) and a content contextual menu can be displayed by right clicking. In cases where the log row relates to a specific asset, the command will operate on that specific asset. In other cases, the text of the log will be scanned for a KUID and the command will act upon the asset with that ID.

A global log viewer may be accessed via the "Developer > Show Logs" menu. This displays game logs equivalent to TS12's "Content Manager Log Panel". As per TS12, this logs all content operations that have occurred recently, allowing you to review the recent actions that you have taken and the success or failure of each action. The logs also include messages from the game runtime, including script messages, script exception logs, and resource load failures.

Test Track is a testing environment for train physics. This is intended to both allow content creators to tune their vehicle engine parameters, and for N3V Games to tune and test the game physics systems under different scenarios.

The Developer Release build is only available to TPC and TEG members, and active discussion between group members is encouraged on the TPC and TEG forums. Since the build is not available to other members of the Trainz community and most aspects of the build will have changed prior to the retail release of TANE, broad discussion of the build on the public forums is not encouraged. N3V asserts ownership of the Developer Release build and does not permit redistribution of the build.