MissionCode Manager is a rule ( <kuid:61392:8200> ) which enables to add, edit and manage Mission Code strings, which can be assigned to trains and can be used to auto select paths in interlocking towers to route the trains to their destination.

This page has been updated to support new features brought with version 60 of Mission code Manager and associated stuff.

Train Mission Codes : what is it and for which purpose ?

Train Mission Codes : in practice how to define them

In the example above, four mission codes strings (CentralToSouth,NorthToSouth,SouthToCentral,SouthToNorth) have been defined for the current session.

This page enables also to set the default global values for Mission Code Manager options like default follow path depth, default follow path option, follow path search distance, exit signal track check mode, unique path select mode option, process all trains option and debugging mode which will be detailed later below in their respective section. The page includes also links to copy MCM data to the common clipboard and to paste MCM data from the common clipboard in order to enable copying MCM data between sessions. It has also a link repair mission codes from internal data that enables to try to recreate missing mission codes from internal MCM data if you have by mistake deleted some still needed mission codes.

Train Mission Codes : how to assign a code to a train 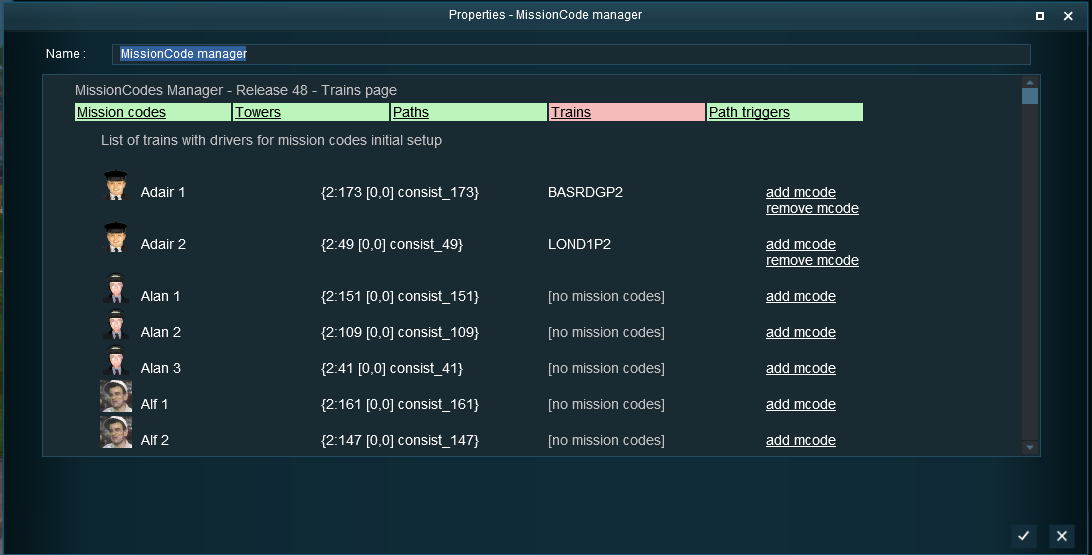 When the session will start, the MissionCode Manager rule will assign all the mission codes that were defined to each of the available train.

This method is the easiest way to assign mission codes to a train as it does not need to use any driver command in schedules.

The other method is to use driver commands to assign mission codes to a train. 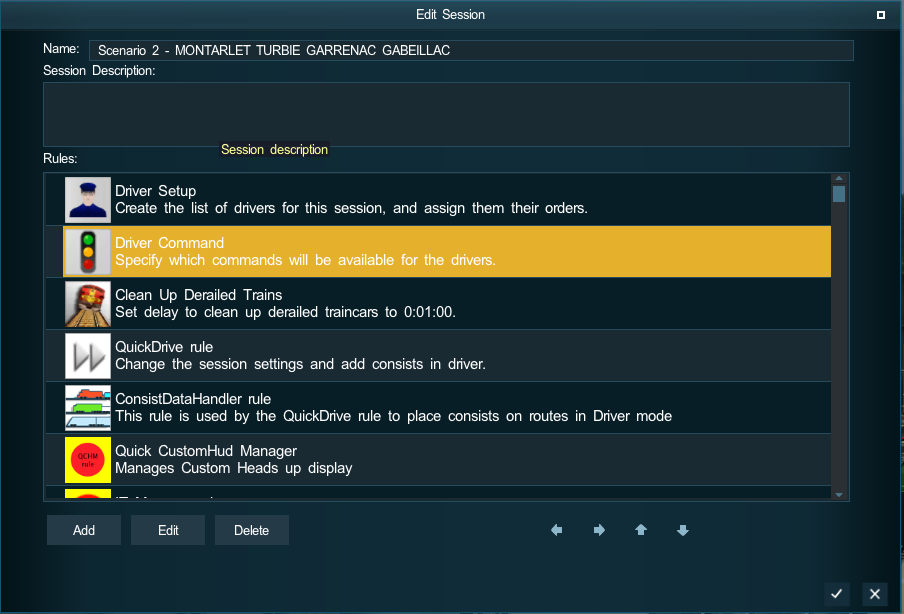 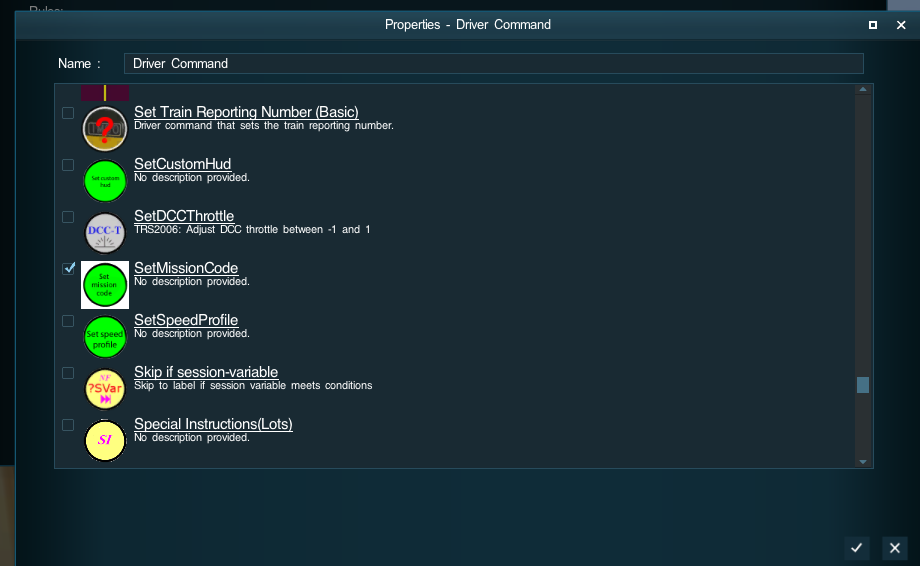 Train Mission Codes : how to assign a code to an interlocking tower and path

The last step is now to assign mission codes to Interlocking Tower Paths.

Since release 28, this page has also now a link to globally enable or disable the path auto assignment standard routine which is automatically called when a train is on approach of a signal at 0.5 mile. With the option disabled no path auto assignment is done for train with mission codes and explicit path assignment must be done using ITSetPathXXX, ITMCAssignNextPath, path trigger or follow path options

And finally, to display, add or suppress mission codes assigned to a path, just click on the view details link for the path you want to look at.

On this path details page, you have some links to add new mission code to the current selected path or to remove some already assigned mission codes.

It is also possible on this page to edit the auto assign AI flag and auto assign flag for the current path.

There is another way to add/remove mission code eligibility for a path. This can be done using the "view paths" link for a specific mission code on the initial mission code page. This link will display all the available paths in all towers : 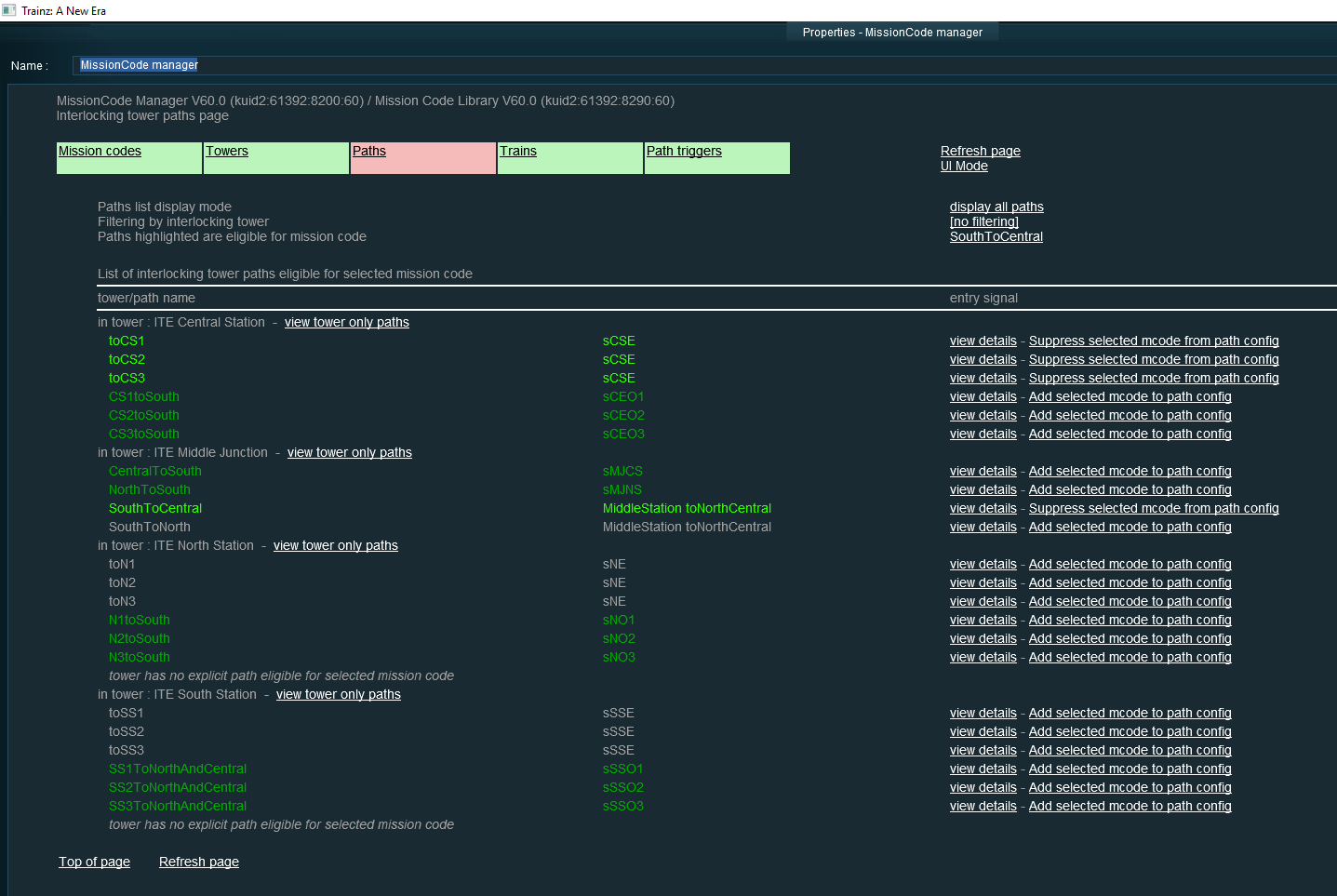 On each path line, depending on its current status, you will find either a "add selected mcode to path config" or "suppress selected mcode from path config" to add or suppress mission code eligibility for the path. By listing for a selected mission code all paths eligibility, it is easy to have a global value of all the paths already enabled for a mission code and to update the configuration if needed. The view details link remains available also on this page to switch to a path view of all eligible mission codes for entering other specific parameters like priority and follow path option.

The page includes at its beginning an option to display all paths or only eligible paths and a tower name filter to enable to tailor this page to your need. To add new mission code eligibility to a path currently not eligible, of course you need to have the display option set to all paths and not limited to eligible paths.

And now that you have defined your mission codes, assigned them to trains and to specific interlocking tower paths, how all these will work together for path assignment.

Quite simple: when a train approach an entry signal, then interlocking tower will call the mission code manager rule as a listener to assign a path for the current train.

To choose the target path, Mission Code Manager will then look in this list of eligible paths for paths with matching mission code at priority 1 then 2 then 3 and will try to assign a path not occupied in the priority order. It is smart enough that if there is only one path available at an entry signal, it will assign this unique path even if no mission code has been assigned to it. If there are several paths available and no paths are eligible the train will remain stuck at the entry signal.

So when you have configured all your mission codes, trains and paths assignment, you only need to run your session and the paths will be auto assigned based on one of the current train mission codes and following your paths mission codes assignment configuration defined in Mission Code Manager.

PathTriggers are standard trackmarks or triggers that help to assign path following the method above when the standard assignment routine called when the train approaches the entry signal is not convenient. PathTrigger enables to do the same assignment process, but earlier or later than with the standard routine called when the train approaches then entry signal (about 1 mile before reaching it). It enables also to assign manual paths (paths with the AI auto assign and Player auto assign flags not set).

To assign paths earlier, you need only to position a trackmark or trigger on the track to the entry signal before the 1 mile standard distance for path assignment. You then need to register in the pathtrigger tab of the mission code manager rule the path trigger you are using. And that's all. When a train will reach a registered path trigger, MissionCode Manager will be called, will look forward for the entry signal along a distance of maximum 10 km and when the next entry signal is found it will immediately launch the auto path assignment process as if the train had already reached the 1 mile distance to the signal. This way you can fire some early auto path assignment before the standard signal reached routine is called.

PathTriggers are optional and need to be used only when the standard path auto assignment routine fired when a train approaches an entry signal is not convenient for your session. Most of my sessions using Mission Code Manager do not have any path trigger, but sometimes in some specific cases path trigger may be very usefull for some specific train behavior.

There is also in the package a driver command ITMCAssignNextPath ( <kuid:61392:8202> ) that will do the same processing as a path trigger on the current train when the command is executed. This driver command may be usefull for train stopped at a platform or a yard to start some auto path assignment process chain with follow on options.

I think that it is all what is needed to use Train Mission code. I hope you will enjoy this new rule to help you for interlocking tower path assignment. And do not hesitate to post in the forum if you need some help or only to make some some comments.