This HowTo guide explores some of the new functionality being introduced in TS12. The art and scripts used here are deliberately simple examples rather than a complex real-world example, so that we can show off the new technology in an easy-to-understand manner.

The following concepts are demonstrated:

There are a few gotchas that developers should be aware of with these techniques:

Desc: This asset is a simple interior mesh for our car. We don't provide any interactive controls at the current time, although you could add these in the regular fashion.

The car's interior is configured similarly to a loco interior, but is missing all of the usual controls. You could add controls for a shift lever, steering wheel, etc. but this example relies on keyboard control and doesn't provide any visual feedback.

A single mesh is provided to give the visual appearance of the interior.

A single camera entry is provided to give the camera position within the interior.

A script class is specified, which provides all the interesting implementation details. The script file contains the following functions:

The Init() function sets up handlers for our various control inputs, and begins the movement thread.

The keypress handlers simply modify some boolean variables so that the ThreadedMovement() function knows the current user input state.

The ThreadedMovement() function continuously updates the position of the parent map object (the car) based on the current user input state. This isn't a particularly efficient way to handle things, because it will chew CPU time even when the car is sitting idle. We don't really care for this example, because Trainz only has one Interior active at any given time. If you were writing a more time-sensitive script you should probably consider starting and stopping the movement thread as required.

Desc: This asset is a simple exterior mesh for our car. You can place this object into a route using Surveyor, and the user can take over control of this object in Driver. This asset uses the "TestCarInterior" interior, and has four wheel attachments which each use the "TestCarWheel" mesh. 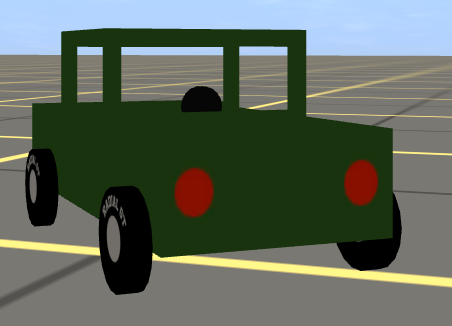 The car is a regular scenery object. There are two things worth noting about its configuration:

2. It uses four attachment effects in its mesh-table, one for each wheel. This will allow us to rotate or translate the wheel as desired.

Desc: A simple wheel mesh. We split these off the body of the car, so that they can be rotated or even bounced up and down independently of the car body.

Creating a Route and Session

The following simple steps allow you to place the car into a session, ready for use:

3. Select the "TestCar" object in the object picker.

4. Click in the 3D world to place a single car instance.

7. Set the rule options as shown in the following screenshot: 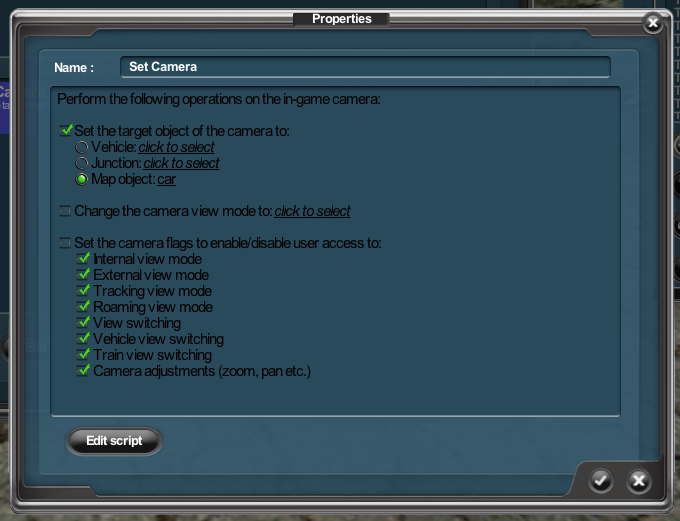 8. That's it! Save and QuickDrive.

Where to go from here

Now that you understand the basic concepts of gathering user input, moving scenery objects, and providing a controllable interior, there are a few other ideas that you could consider trying on your own: