Trains tab (F7) allows you to pick a loco/rolling stock from a list to place on some track previously laid.

NOTE: In TANE and TRS19, the Train tab is also available in Driver. In TANE, it is on the right hand side of the driver screen.

In TRS19 it is accessed from the Tools menu on the top menubar.

Clicking LMB on the Train Mode (T) button in this tab allows you to assemble consists. A list of all engines and rolling stock is displayed below this button. Below the list are selection lists for Train Origin and Train Company. If “All” is selected in both of these lists, all consists and rolling stock will be displayed. By selecting a region or company in these lists the list displayed can be restricted to just that company or just that region or both. 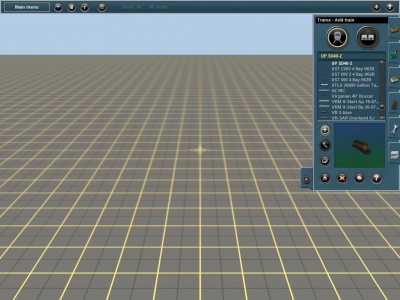 Click on Add Train (A) to enable the building of a consist. Click LMB on the engine or rolling stock asset in the list that you would like to place on the route. A picture of the asset appears in the Train Viewer window in the bottom of the tab. Click LMB on the asset in the Train Viewer window, the picture will rotate to show you different views of the selected item. Click RMB+H on the item in the picture and move your mouse forward and back to increase and decrease the size of the item in the Train Viewer window. Click on a location on a track in your route and your item will be placed at that point. To add items to your cosist Click LMB on one end of the consist or the other . The Red and Green arrows adjust to mark the ends of the consist. If you Click LMB too far away from the end of the consist, a new one will be created.

Click LMB on Move Train (M) then LMB+H a train car. You can then drag the mouse to move the traincar anywhere that there is track.

Once Get Train (G) is selected, Click LMB on any car in any consist on the route and that car will be selected from the list in the Trains tab and displayed in the Train Viewer window. Then Click LMB on Add Train to place it.

Right clicking the Get Train button will toggle to or from the Get to Pick List function.

The Get to Picklist tool allows you to 'get' any train on a route, and then add it to a Pick List automatically.

Click LMB on Decouple Carriage (X) and then move the cursor to a point near the connection between two items in a consist until an image (colored Red) of a coupler appears. Click LMB on the coupler and it will be seen to open. Additional Green and Red arrows will appear above the point of uncoupling to mark off the two consists that have now been made from the one original consist.

A name will be automatically assigned to the engine or car by adding a number to its name, which can be customized, as found in the list of locos and cars. Names for locos and rolling stock persist only for this particular session.

Running numbers for some engines or cars can be changed by Clicking LMB on the underlined text after the words Running Number: a new window opens in which you may enter the number of your choice. If a running number has been assigned automatically this will be indicated.

If the engine or car supports commodities then they are configured in the area below the general properties. Typical commodities include fuel (diesel or coal) for engines, coal for tenders, general goods or any other product for wagons, and passengers for coaches. 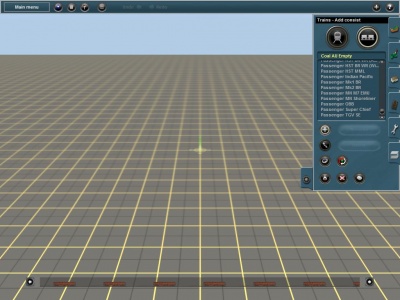 Click LMB on the Rename Consist Template button to rename the Custom consist currently selected in the list. A window will open up in which you may do the renaming.

Click LMB on the Delete Consist Template button to delete the Custom consist currently selected in the list. A window will open up in which you will click on the Yes or No button to confirm or deny the deletion.

Click LMB on Add Consist (A) to add one of your chosen consists to your route. Click LMB at any point on the track to place the complete consist there.

Click LMB on Move Consist (M) to enable you to move any consist on your route along the track to adjust its starting position. Click LMB+H on any consist to move it back and forth along the track. To join two separate consists together, move one consist along the track until it touches the other then release LMB. The two sets of associated Red and Green arrows that marked out the will then combine into one set for the new consist.

Click LMB on Rotate Consist (R) to enable the rotation of any consist so that it is pointed in the other direction. Click LMB on the consist to change its direction. The Red and Green arrows will also switch positions to reflect the rotation.

Click LMB on the Change Heading (H) button to enable the changing of the heading of a consist. Then Click LMB on any consist and the Green and Red arrows will move to opposite ends of the consist setting the direction that will be forward when the consist is started in Driver mode.

Click LMB on Get Consist (G) to add new consists to the consist list. This also allows the quick selection and replication of consists already within the route.

Right clicking the Get Consist button will toggle to or from the Get to Pick List function.

The Get to Picklist tool allows you to 'get' any train consist on a route, and then add the items in the consist to a Pick List automatically.

Click LMB on the Delete Consist (D) button (not to be confused with the big gray colored Delete Train Template button in the middle of the Tab) to enable the deletion of consist placed on the track. Then Click LMB on any consist to remove it.

Click LMB on the Decouple Carriage (X) button to enable the decoupling of parts of a consist. Then Click LMB on the coupler icon that will appear when you move the cursor between cars or engines in a consist. You will see that the red and Green arrows will show that you now have two consists.